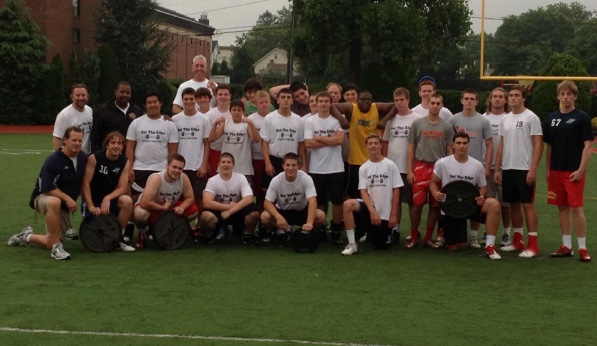 I am proud to have been selected once again to coach this year at a series of Under Armour All-America Elite Football Camps. The first camp was held a few weeks ago in Cleveland Ohio where I coached 26 of the best high school linebackers in the Mid-West. What an experience and privilege!

➢ The top performers at each position are invited to play in the UA All America Game held in Orlando, Florida.

The first part of the camp starts with each position performing a sequence of drills that helps the coaches assess their individual athleticism. During the second part, coaches run drills to prepare their athlete’s for one on one man coverage and pass rush drills.

Coaching insight #1 – athletes displaying a higher level of athleticism and proficiency during the first series of drills are more successful in the second part featuring 1-on-1 competition. A large percentage of these players are multi-sport athletes who have been exposed to a larger and more diverse skill set. The components I look for when assessing athleticism include the following:

Body Position – All movement begins with great body position. Proper athletic posture at the moment of throwing, kicking, striking, shooting and/or direction change is extremely important. This requires an athlete to bend slightly at the knees, hinge or rotate at the hips, keep their shoulders up and back slightly arched, not rounded. This requires a strong core (trunk).

Movement & Coordination – Great athletes are fluid and transition their body movements through space effortlessly. It’s important to have quick feet, but the hips are even more important. They are the transfer system for the lower body through the trunk and upper extremities. Great athletes have the ability to lower their hips while moving fast. This allows them to plant, pivot and change direction quickly and under control.

Strength, Speed & Agility – The ability to accelerate, decelerate, stop, re-accelerate without losing balance, strength and speed are essential in all field and court sports. For all athletes, strength is not functional unless it can be applied with correct body position and balance on one or both feet.

Reaction – Athleticism becomes obvious when an athlete has to move in space to evade or defend an opponent. Vision and spatial awareness is vital. The best defensive players move to eliminate space between themselves and their opponents. This forces the offensive player to be one-dimensional and less elusive. The best offensive players move to create space between themselves and their opponents. This provides adequate time to produce successful game speed movement.

At Get The Edge, our program concentrates on enhancing the components of athleticism. This includes flexibility, balance, movement coordination, strength, speed, power, endurance, durability, and self-confidence. Working with athletes ranging from middle school to the professional level, I know that the athletes who possess these characteristics, prior to mastering sport specific skills and tactics, are more confident and less injury prone. By focusing on improving athleticism first and performance second, we enhance injury reduction and instill a smarter work ethic that gives each athlete “the edge” !